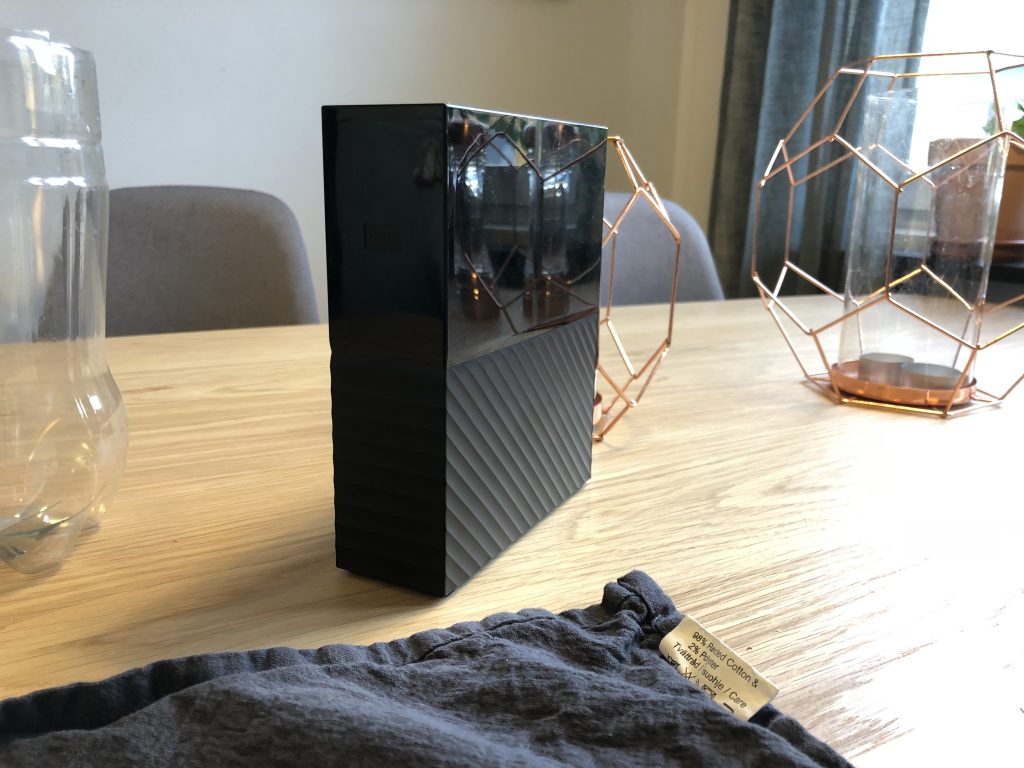 I just bought 2 Western Digital My Book 8 TB for EUR 157,55 each (incl. 25% VAT because communist Swede here) from amazon.de. The goal was to extract the drives and insert them as regular SATA drives into my home server for extra storage.

I figured I could share how I did this without destroying a single plastic pin on the external enclosure.First, I cut two stripes from a Coca Cola bottle. I made these slightly shorter than the width of the WD enclosure (kind of hard to see in the image) 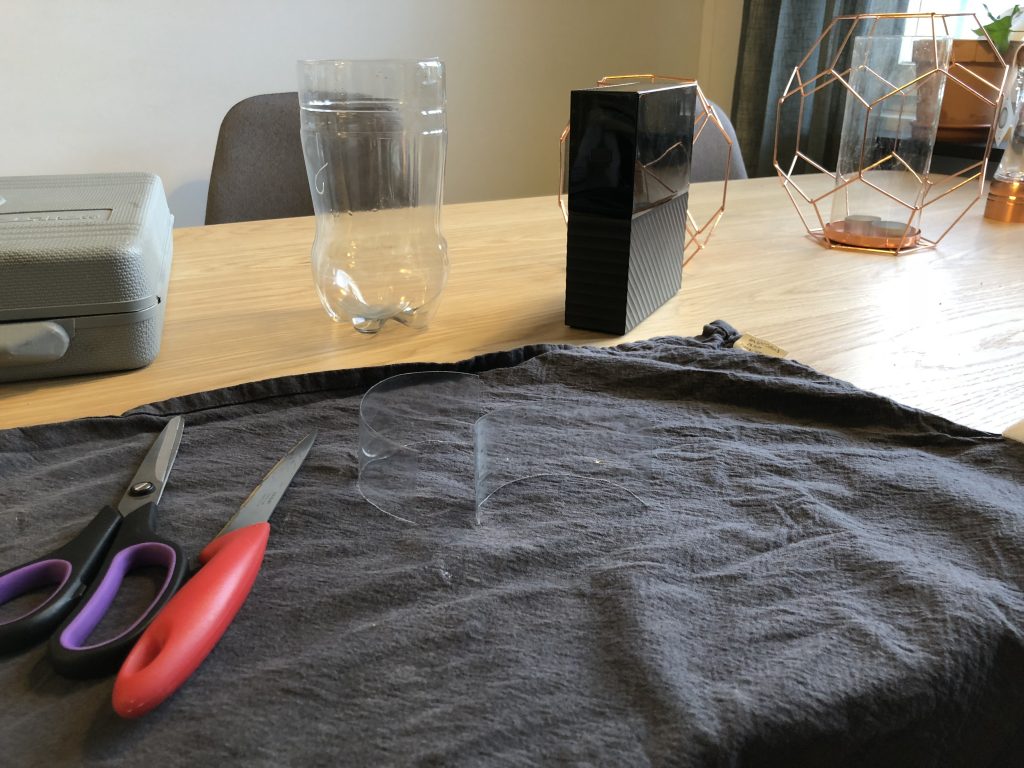 I then used a flat head screw driver to pry these plastic stripes in the top of the enclosure like this: 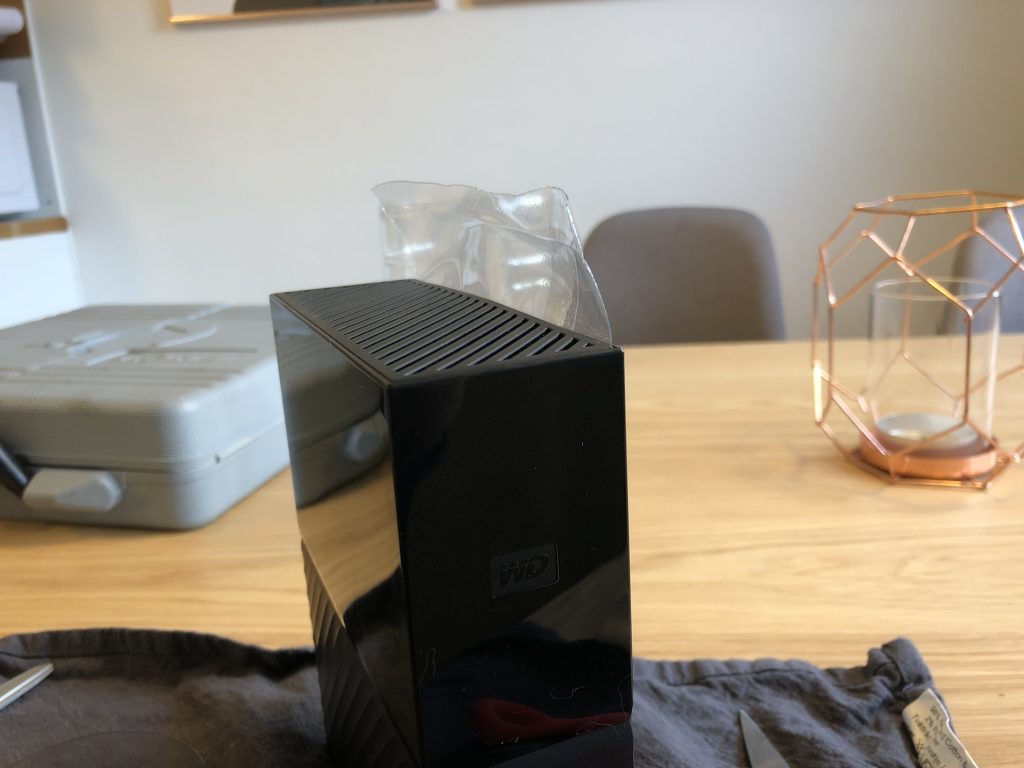 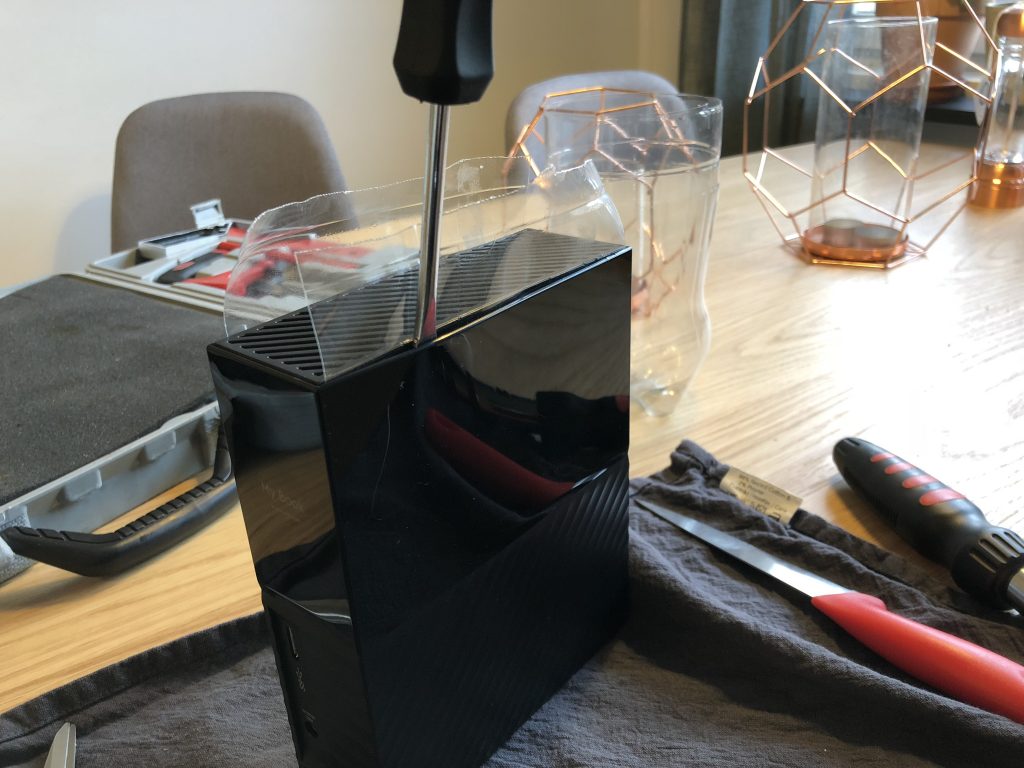 And no, that’s not a scratch, just a piece of hair 🙂

These plastic coca cola bottle stripes will “unhook” the plastic clips from each other, making it possible for the enclosure to come apart.

Next thing to do is to flip then enclosure around, take the flat head screw driver and pry along the bottom seem and at the same time, push the inner enclosure uprwards. Like this: 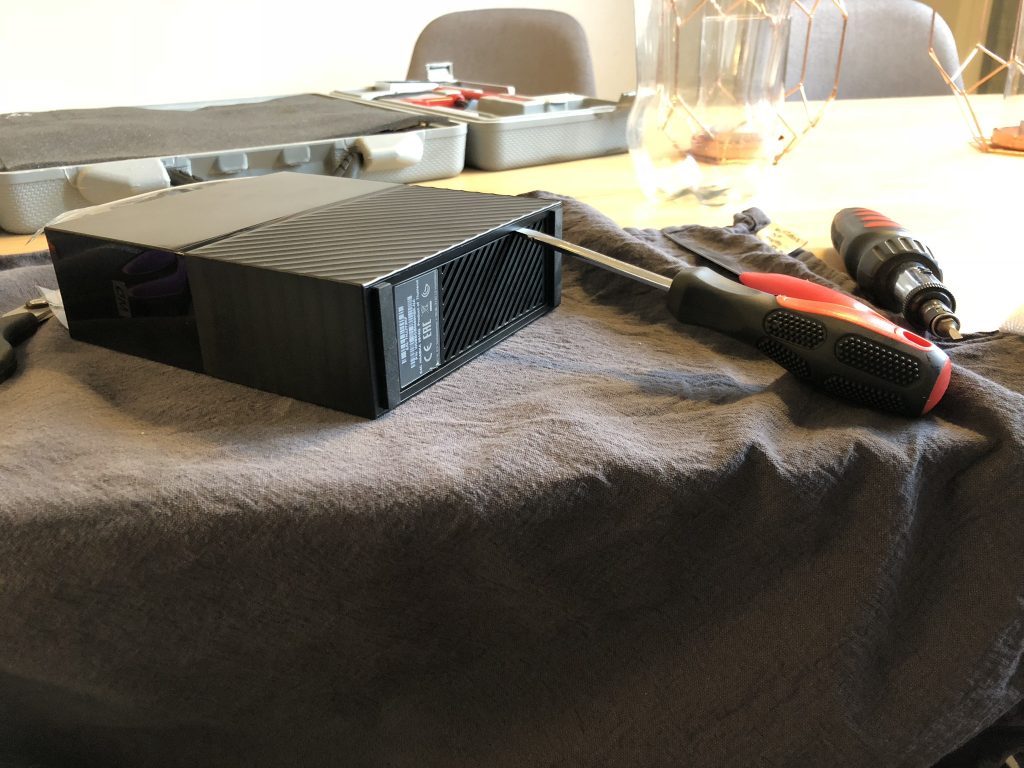 As you move along the edge with the screwdriver you’ll probably notice how the inner part of the enclosure starts to come out and eventually (after moving around the entire edge) it will pop out like this: 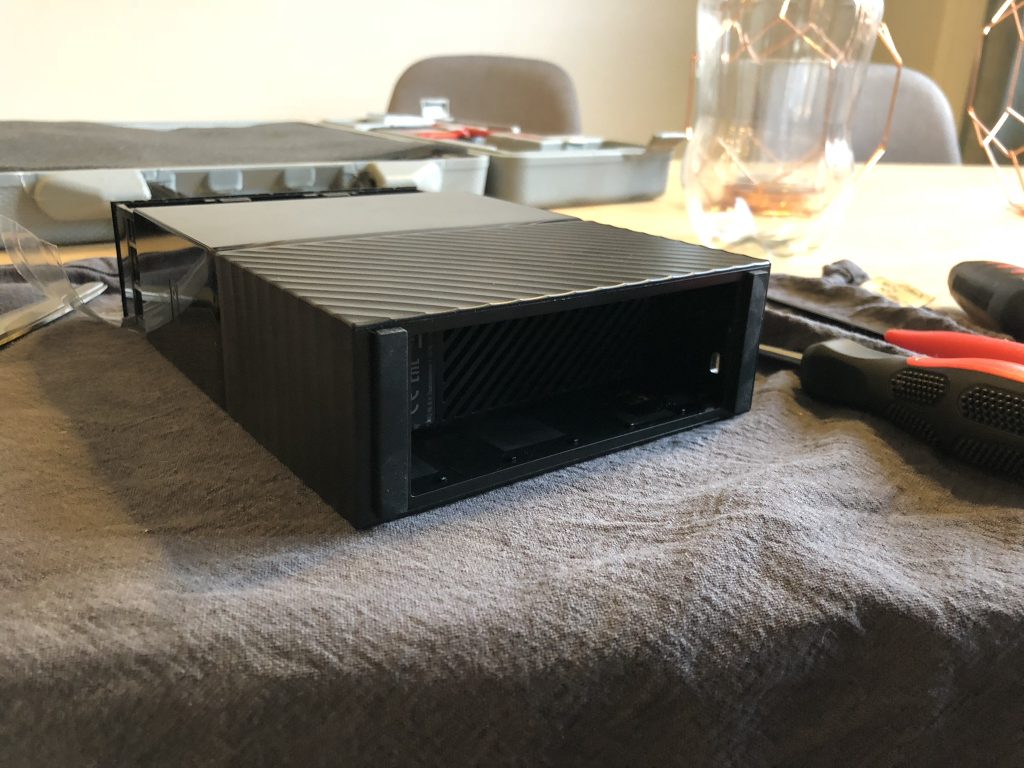 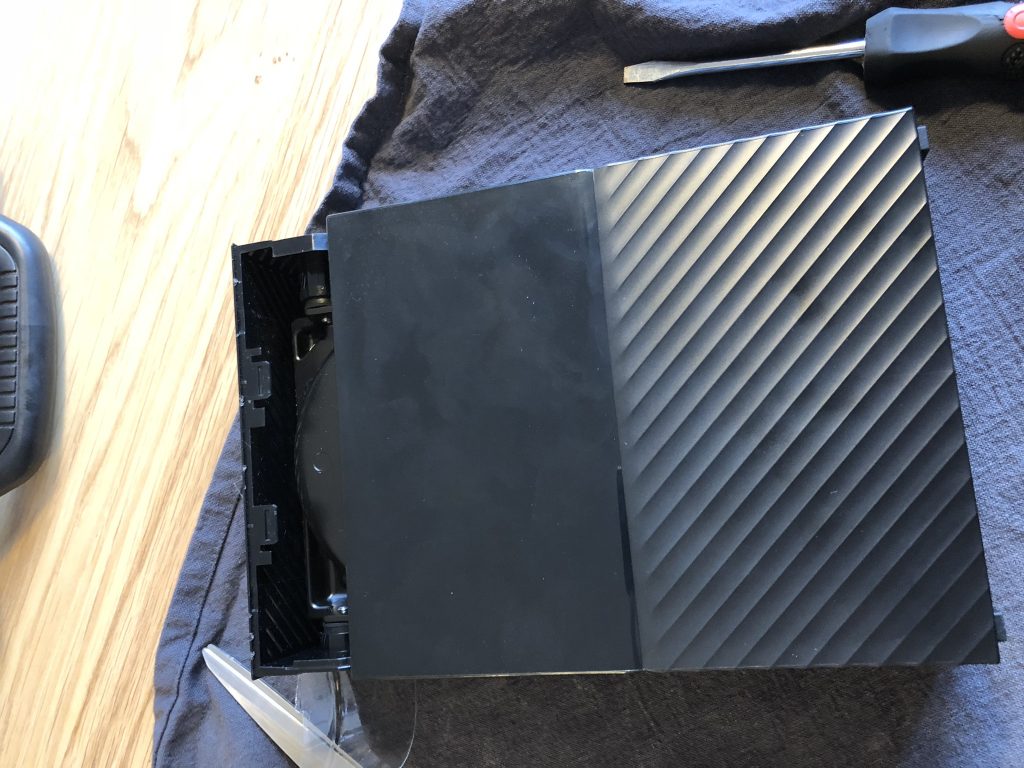 The included drive is a WD80EZAZ (was in both enclosures) and according to this reddit post, it’s a (White label with metal strips) = US7SAL080 = Ultrastar He10-8 SATA (3.3v reset, source WDBBGB0080HBK) 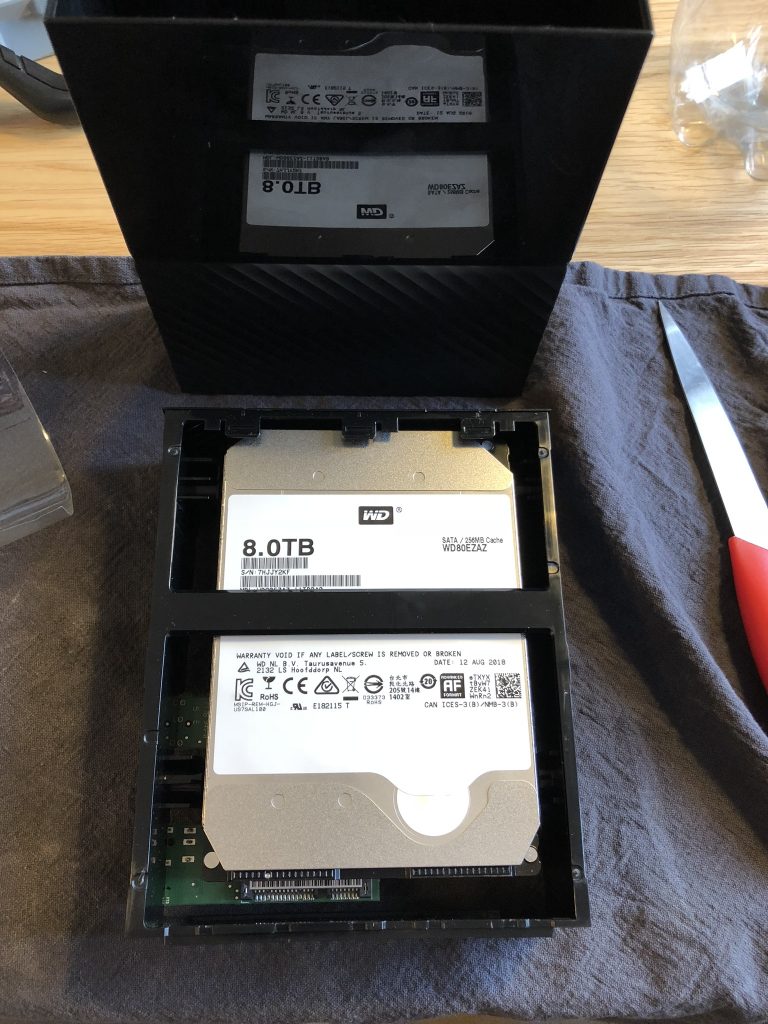 Now we just have to remove the hard drive from the inner enclosure. Notice how the gap between the drive and the plastic surrounding is larger on one side versus the other. To remove the drive, just bend out the plastic “edge” on the side where the gap is largest. While doing this, gently push the drive out like so: 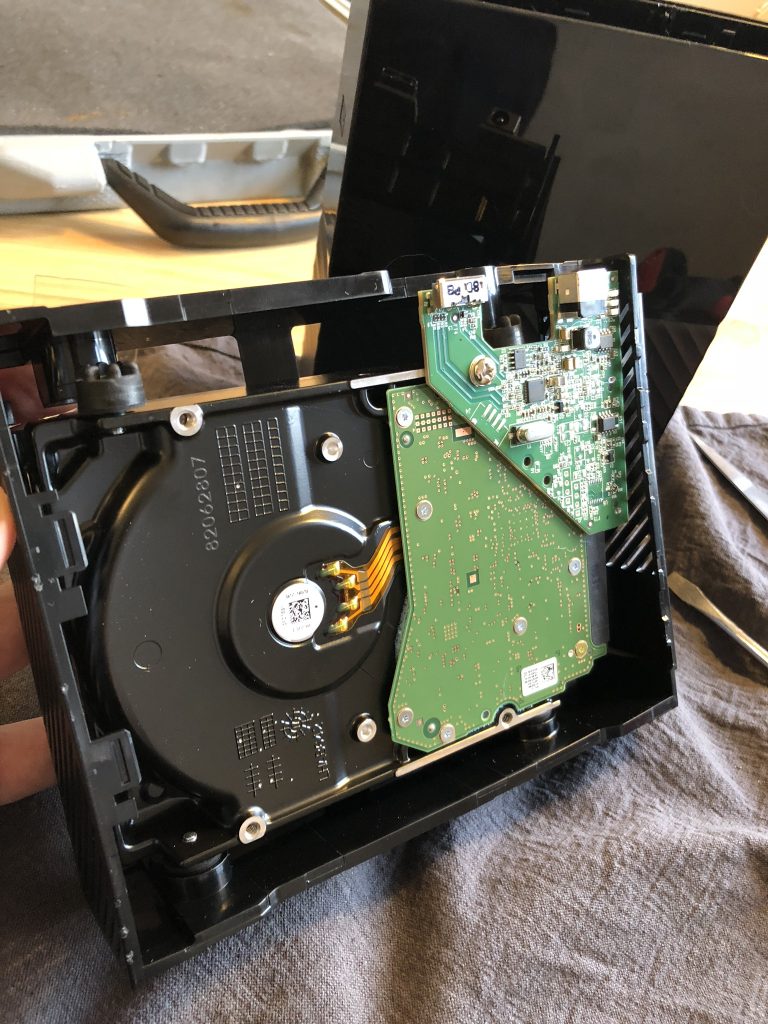 The 4 rubber caps and metal distances on each side of the drive can easily be unscrewed with a set of pliers like so: 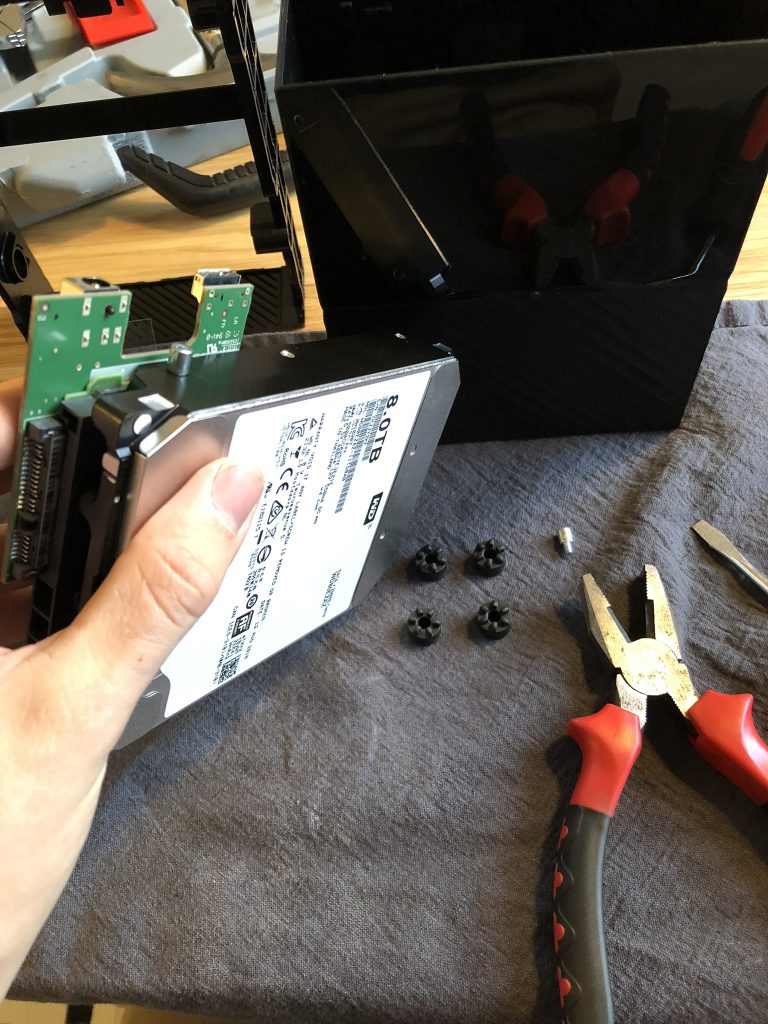 Now, unscrew the one Philips head screw holding the usb to sata interface card and when the screw is removed, be sure NOT to lift the card and break the power/sata ports on the drive itself.

Gently push the usb-to-sata interface card straight out in the same direction as you would if you would disconnect a cable from the drive. 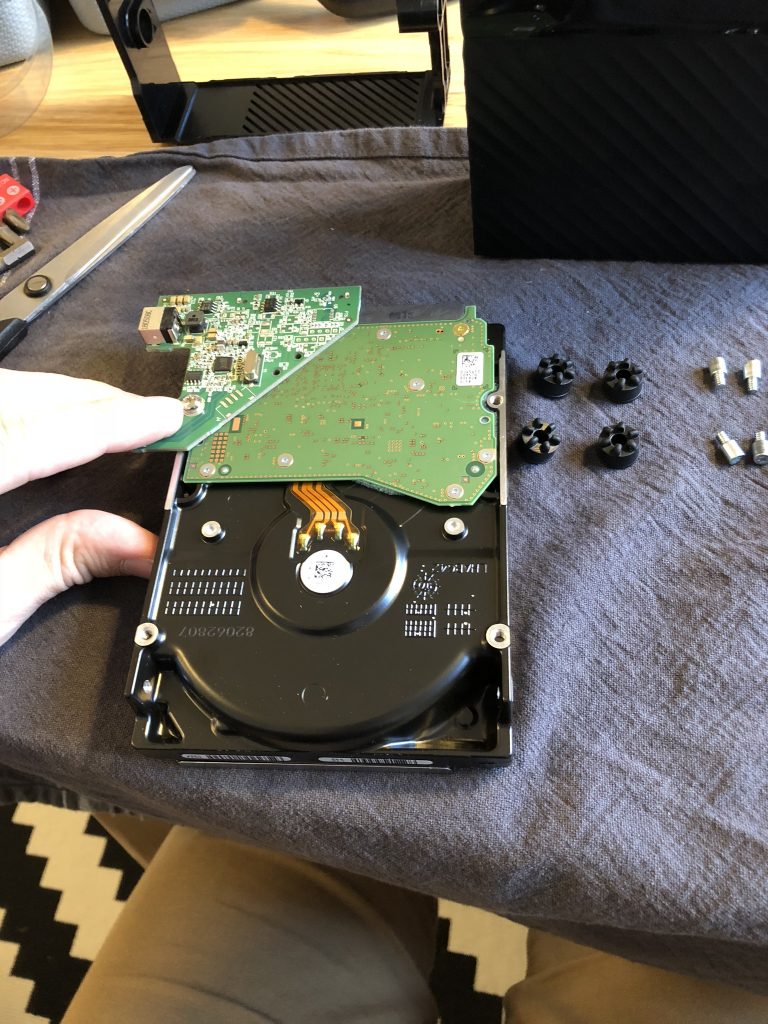 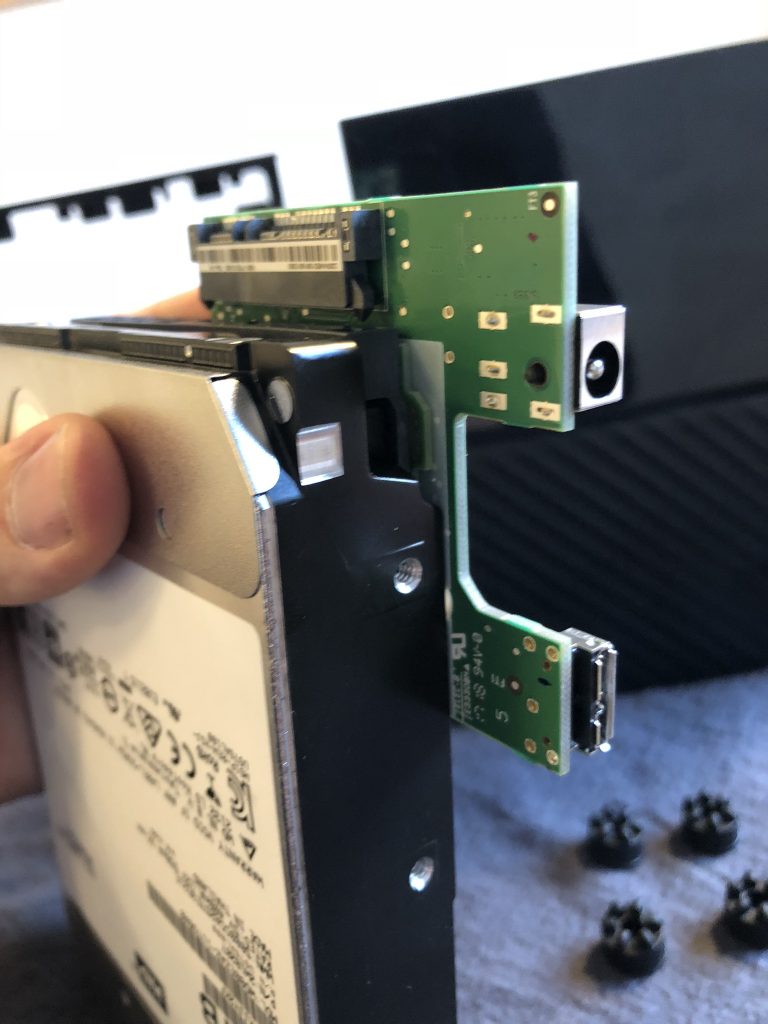 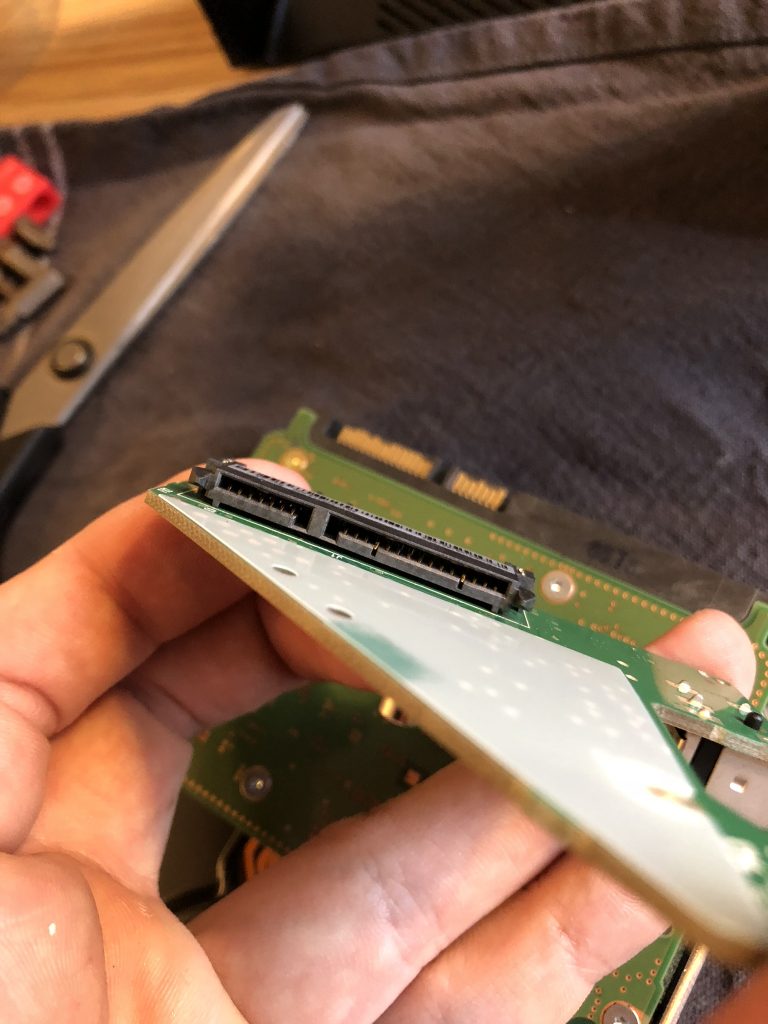 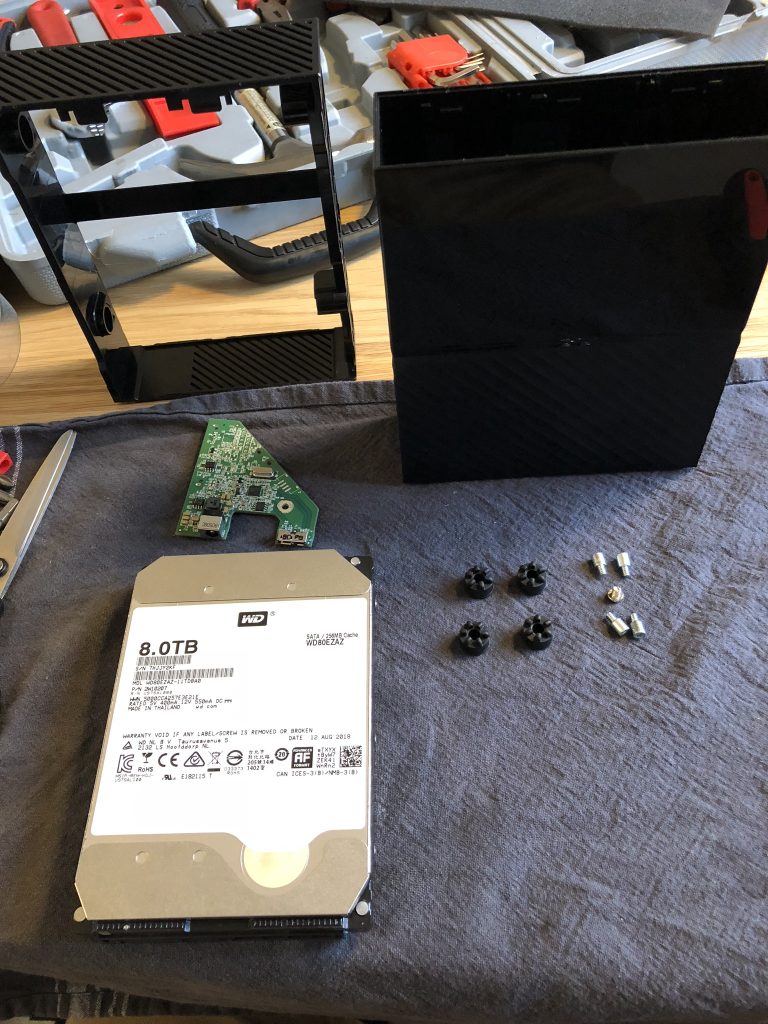 Finally free! Now I inserted the drive into my computer to test if I could see it in bios. To bad I did not.

This indicated that my power supply isn’t compatible with the 3.3V pin that exist on these drives.

To fix this, I just cut a piece of electrical tape and covered the 3rd pin. It was hard to get a piece that was thin enough so I made one that covered all 3 first pins. I read somewhere that these aren’t used anyhow so I figures I’ll just try. TL;DR It works just fine! Just be sure to cover the entire 3rd 3.3V pin. 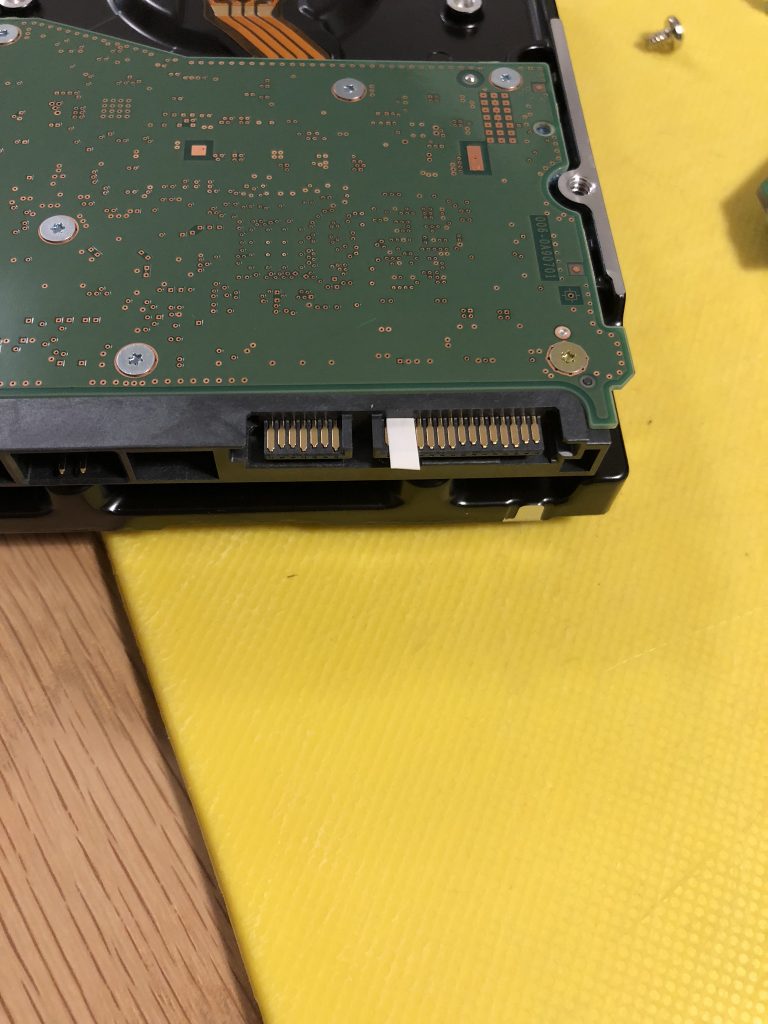 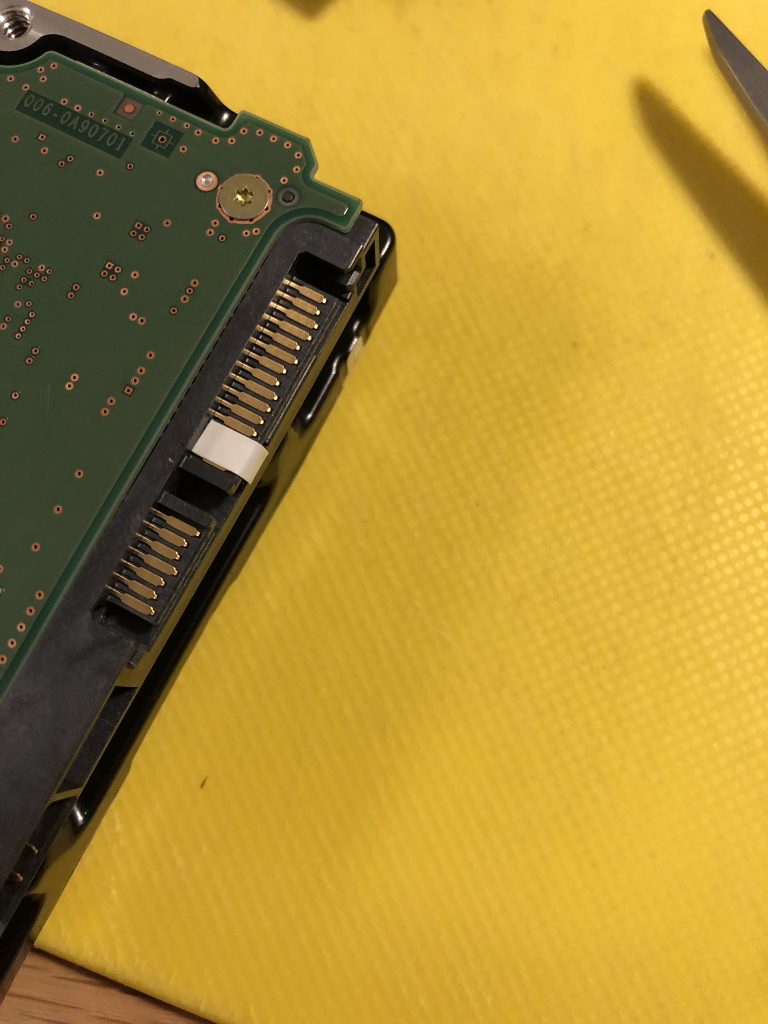 After this, I connected the drive to my computer again. Be gentle so you don’t push the small piece of electrical tape away (try and fold it around the edge to make it stick better).

Here’s a picture after I’ve added both drives to my windows server 2016 storage pool:

Do you have any questions? Just AMA down below.